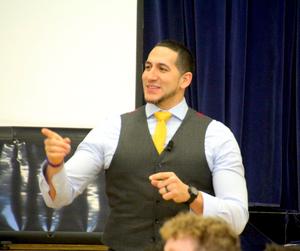 Guest Speaker Shares "All In" Message

On Wednesday, January 15th, OP welcomed motivational speaker and teacher Gian Paul Gonzalez to OP to speak with our students. Gian Paul gained acclaim after speaking to the NY Giants the night before their game on Christmas Eve in 2011. The next day after Gian Paul’s chapel message the Giants beat the Jets 29-14. In a post game interview, Giant’s Defensive End, Justin Tuck credited Gian Paul's message of being “All In” as the reason the Giants won that day. The team went on to win every game, up to and including Super Bowl XLVI, where they beat the New England Patriots 21-17. His message of "All In" has been embraced by professional & college sports teams, Forbes 500 Corporations, and even the Army, Air Force & FBI.
Read More »

Congratulations to our Varsity, JV and Freshman Basketball teams which all won championships in their respective tournaments. The Varsity team won the championship over host school Morristown Beard by a score of 50-36. Oratory (3-1) took control early on, taking a 29-9 lead into halftime after leading 11-6 following the first quarter. Senior guard Peter Byrne lead the team in the championship with 18 points while sophomore Tommy Conniff added 12.
Read More » 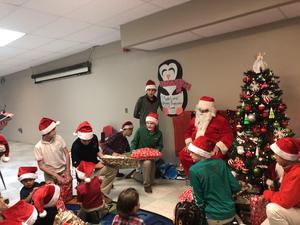 On Wednesday, December 18th, our middle school students and Santa visited Friendship Corner in Paterson, NJ to deliver gifts and to sing and read with the preschoolers. Everyone had a great time getting into the holiday spirit!
Read More » 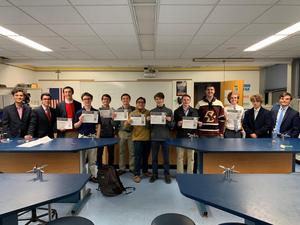 On Friday, December 6, the Oratory Prep Model UN Club hosted its second annual mini-conference. The event - which also hosted members of the Basking Ridge Model UN Club - was organized and run by seniors Daniel Carvalheiro-Santos, Jack Mogen, Matthew Mazzuca, and Richard Williams. All participants contributed to the night's success with their enthusiasm, maturity, and passion for global affairs.
Read More » 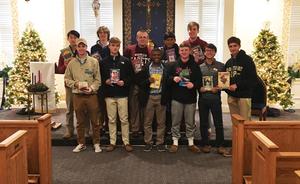 The Oratory Prep Service Book Club collected close to 1000 children's books for children in need. Senior Chris Lowe and his father delivered the books on Thursday afternoon. Thanks to all who donated!
Read More »

On Tuesday, December 17, Oratory Prep will be on a two-hour delayed opening. All students should report to school by 10 AM. All buses and shuttles will run on a two hour delayed schedule. Please drive carefully. Any additional weather announcement will be sent by 7:00 AM.
Read More »

Congrats to Ty Cross '20 (not pictured), Robert Grasso '22 and Benedict Martinez '22 for being awarded the Archdiocesan Youth Award for sharing their talents, time and service to their parishes and school. It was this past Sunday at the Cathedral Basilica of the Sacred Heart. Msgr. Tom Nydegger, our Vicar General, was the Main Celebrant and Homilist for the ceremony. Peter Ainsworth '20 was Altar Server. Congratulations on your achievement.
Read More »

On Tuesday, December 3, Oratory will be on 2-hour delayed opening. Students should report to school by 10AM. All buses & shuttles will run on 2-hour delay.
Read More »

Due to the hazardous weather and winter storm warning, Oratory Prep will be closed on Monday, December 2. All after-school activities and sports are canceled. Students should check Netclass for assignments
Read More »

Freshman Jack Chacon spent the day on Capitol Hill yesterday advocating for Hereditary Angioedema, a ﻿rare and life threatening blood disorder he suffers from. He met with seven House & Senate representative offices sharing his story and asking for their support on bills that greatly affect the patient community, including Access to Marketplace Insurance and the Safe Step Act as well as an increase in funding for the National Institutes of Health (NIH) for additional research.
Read More »
RSS Feed